The designation of "the Artillery Clerks' Section" was first created under Army Order 54 of 1903 and remained in force until the establishment of the Adjutant's General Corps in 1992. Having proudly served the Royal Regiment of Artillery for 83 years, the cohort of Artillery Clerks were required to change their cap badge and allegiance, and complete their individual service chiefly within the Staff and Personnel Support arm of the newly formed Corps.

All Artillery Clerks were enlisted primarily as Artillerymen before being selected to assume the essential administrative and personnel support duties within the various Headquarters and Field and Training Regiments of the Royal Regiment of Artillery, leaning on their personal pride to serve and support others as enthusiastic members of the Gunner family around the world in peace time and on active service.

From after WW2, it looks possible that the status of Artillery Clerk was only bestowed on those soldiers in the Royal Artillery who attained the educational and clerical grades in the rank of Sergeant through to Warrant Officer Class 1, and this became the norm from the 1950s. This unique privilege served to create a "special bond" which exists to this day.

The Artillery Clerks' Association was formed in Woolwich in 1998 and next year (2023) marks our 25th anniversary. The Association members are determined to preserve their proud heritage as well as the memory and role played by Artillery Clerks in the last century.

The centrepiece will provide a visible permanent commemorative reminder of the Association, the service of its past and present members, and the value and high regard with which Artillery Clerks were held by their fellow gunners, officers and soldiers alike.

The centrepiece will be securely housed, displayed and maintained with other regimental artifacts in the Central Sergeants' Mess at Larkhill Garrison, the new spiritual home of the Royal Regiment of Artillery.

Update as at 18 Jan 23 - Commissioning Phase

In October 2022 the Project Team announced that the Silver Centrepiece project moved seamlessly into the Commissioning Phase.

Our fundraising systems are however still in place to allow those who wish to become part of this project to do so when time and finances allow.

The Association Committee would like to continue to receive personal contributions from members and honorary members, whose names will be added and acknowledged on the name plate (see below). The closing date will be discussed and decided at the 2023 AGM which is being planned to be held virtually on Tuesday 7th March 2023 at 19:00 hours, to coincide with the 25th Anniversary of the formation of the Association.

There are two options available for donating to the AC Association Silver Fund, namely:

Post:  By cheque to the Treasurer: 9 Fairfield Road, Ainsdale, Southport, Merseyside PR8 3LH, made payable to the ‘Artillery Clerks’ Association’, annotated on the back with "DONSILVER23", or;

Electronic transfer:  Make an electronic bank transfer, using "DONSILVER23" as the reference, to the account details provided below:

Please click the “silver piece donation” button at the top of the page and complete the form to inform the Treasurer accordingly.

It has always been our declared intention that a proportion of the excess funds raised will be donated to the Royal Artillery Charitable Fund (RACF), which helps serving and veteran Gunners and their dependents. It is worth noting that since our formation several of our members have benefited directly from the RACF.

The current “Acknowledgement” Silver plate, showing all donors as of 18th January 2023, looks like this: 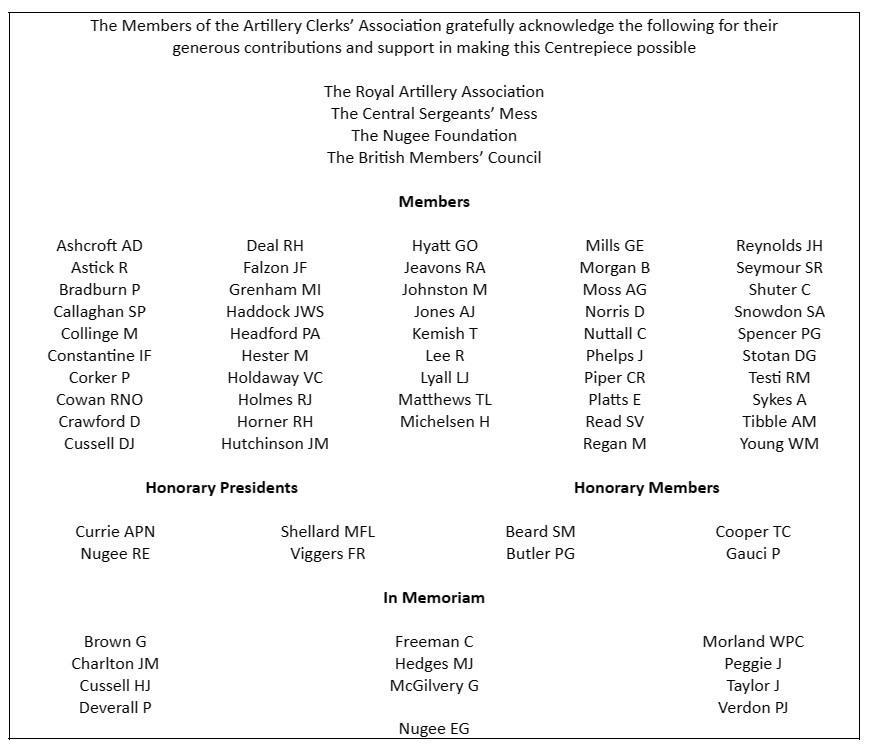 It is worthy of note that Members (some of whom wish to remain anonymous) have made separate sponsored donations in memory of former AC colleagues – see above – endorsing the huge sense of respect of each other which is a hallmark of our Association.

Thanks go out to the members of the Association Committee and all members who have backed this project so handsomely and so generously. Everyone’s support and encouragement over the past 24 years since our formation has been influential in enhancing our special bond of comradeship. This continuous and visible endorsement sustains our organisation and makes all the difference.